[Another transcription of an article written for the BDS Hawker e-publication.]

Bluet is a succinct term encompassing two genera, Coenagrion and Enallagma. These are the Blue-striped Damselflies which usually follow hot on the heels of the Large Red Damselfly in mid April.

The UK is home to seven Bluet species, six Coenagrions and one Enallagma, but four of the Coenagrions have very restricted ranges, so much so that they are red listed. These four tend to be the targets of specific searches. Thus most of us need concern ourselves with just three Bluets, the two remaining Coenagrions, the Azure (C. puella) and Variable (C. pulchellum) Damselflies, and the Common Blue Damselfly (Enallagma cyathigerum). The Variable is quite widespread in England geographically but has very patchy distribution. It has a strong hold on Ireland. 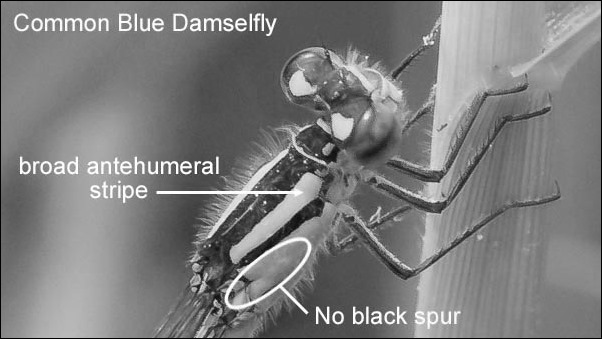 The Azure and Variable Damselflies make us work harder, particularly the females. Both species double the stakes by presenting us with two female colour forms, a dark form and a blue form. The blue:black ratio can help with the blue forms but the dark forms look essentially identical.

Enter: the pronotum. The pronotum (pl. pronota) is the plate covering the prothorax just behind the head. Much is made of it in field guides so the term is likely to be familiar. The pronotum is what the male latches onto during mating. The rear edge shape of the pronotum differs between species; it is key to the male and now becomes key to us.

In both colour forms, the pronotum of Azure females has a smooth, gentle curve to its rear edge. By contrast the pronotum of Variable females is trilobed with deep notches between the central and side lobes. This is fine detail so clear photographs from a suitable angle are needed for certainty. Well, we like a challenge. 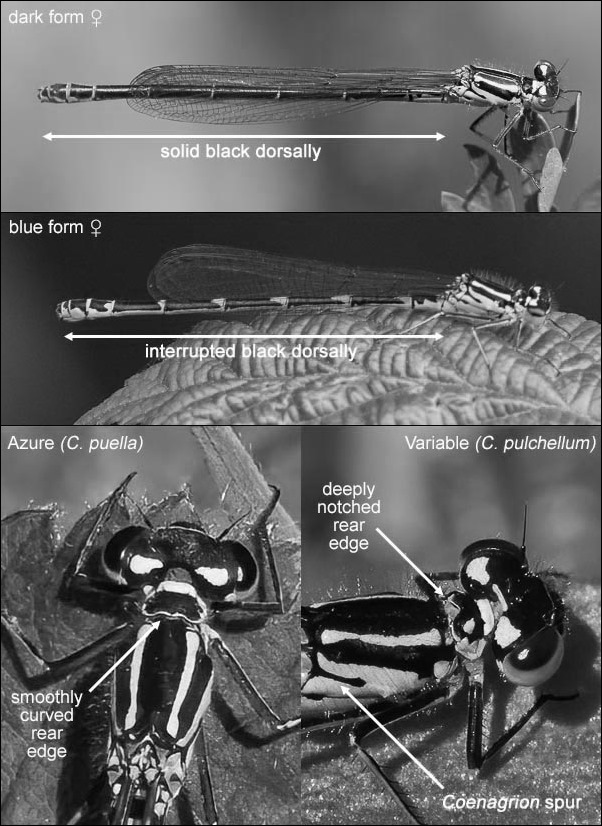 We are less accustomed to considering the pronotum of males because textbook males present little problem, Variables famously showing broken antehumeral stripes. Variables also have a wine glass design on S2 with a stem joining to the suture. Azures, by contrast, have complete antehumeral stripes and a U-mark on S2 separated from the suture. On S9, Variables show a bat mark whereas Azures sport a bow-tie. Most Azures have no interocular bar but this is not a reliable feature for identification.

However, here we see that not all individuals go by the book. My exclamation marks show deviations from expectation. This Variable could easily be mistaken for an Azure at first glance with complete antehumerals and apparently no stem on S2, though beware that wing veins can obscure very fine stems. Such Variables have been tagged Coenagrion pulchellum puellaformis (i.e. looks like C. puella).The S9 marks are more reliable but do exhibit some natural variation.

So enter once again: the pronotum. That of the Azure, as in the female, has a smoothly curved rear edge with a noticeable light rear border. By contrast, that of the Variable has a plain black rear edge which, though tricky to see being black against black, has a pronounced central lobe with no light rear border. 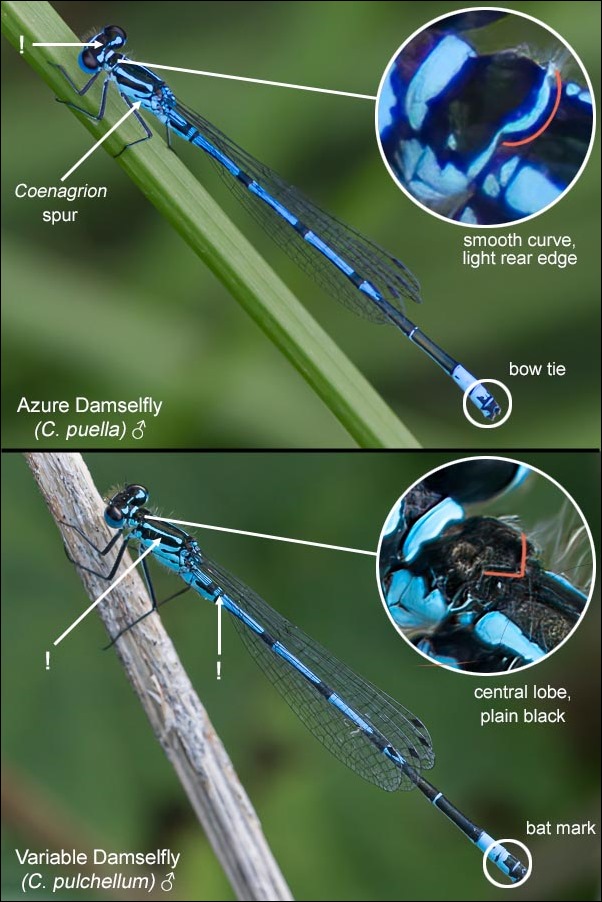