[This is a transcription of an identification article I wrote for the BDS in March 2022.]

It’s the same every year: as spring approaches the odonata fan base holds its collective breath in anticipation of the new season, usually heralded by the Large Red Damselfly (Pyrrhosoma nymphula).

The county of Cornwall, in the far southwest England, frequently kicks off in late March, closely followed by other south coast counties and gradually spreading north, though there are exceptions. My local patch, a pocket handkerchief reserve in Bedfordshire, tends to make me wait until late April or early May.

The Large Red Damselfly is an interesting species with its norm of a 2-year life cycle. Many larvae spend their 2nd winter in diapause, a phenomenon which supports a synchronized emergence in early spring as conditions improve.

It is a widespread species throughout the British Isles and has one of the longer flight seasons lasting through September – a period bettering six months. Since the adult lifespan of a damselfly is rarely more than a couple of weeks, clearly other individuals miss the synchronization and continue to emerge throughout the summer.

Females of the species add to its interest with three recognized colour forms based upon the extent of dorsal black on the abdomen. However, authors confuse the issue slightly by seeming to disagree on the name of one of these colour forms. Form fulvipes sports least black, followed by f. typica/intermedia, and the rarer f. melanotum with an entirely black abdomen, dorsally. In truth there are four forms since there are said to be two forms of melanotum, one with some lateral red on the abdomen and another with no red at all. 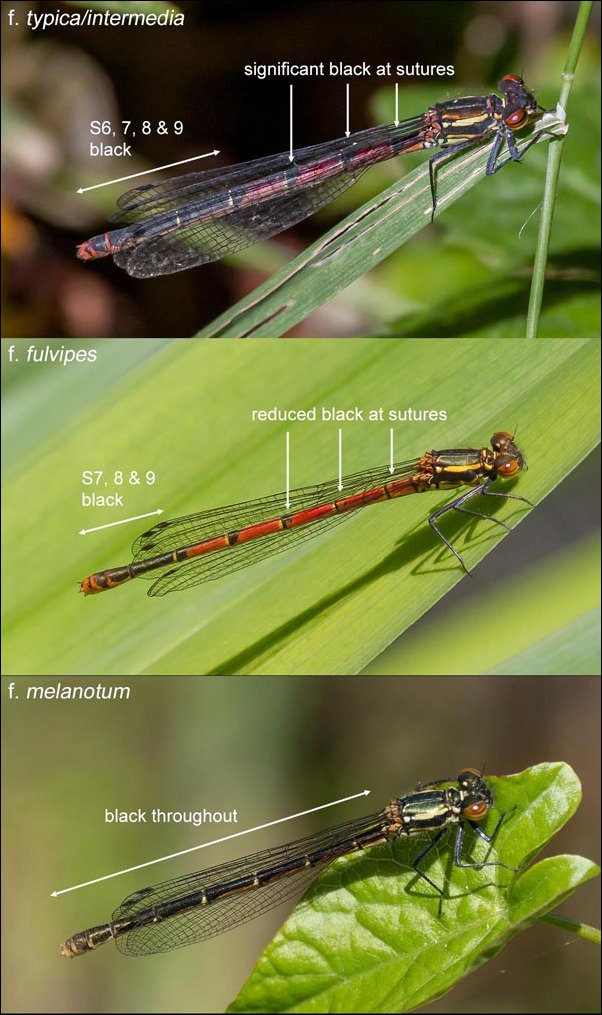 The mix of female colour forms is said to vary markedly by population. Females at my own local patch seem to be almost entirely form fulvipes. In 2021, I stumbled across a small colony on the north coast of Cornwall having what seemed like a majority of form melanotum females, though it must be said that total numbers were not large. I was delighted since this was my first encounter with melanotum. Comparing different colonies colour variations could make for an interesting study.

With the exception of f. melanotum, both sexes emerge with yellow antehumeral stripes which turn red with maturity. 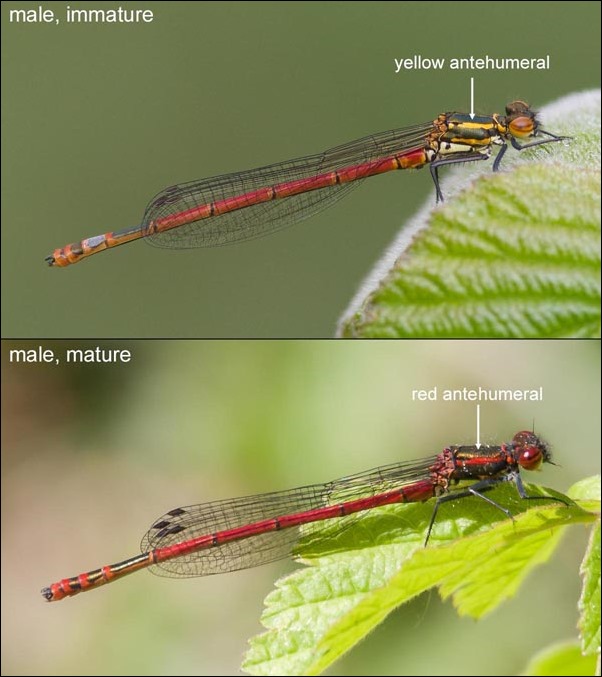 Whilst the Large Red Damselfly may not be one of the trickier species to identify, there are a couple of useful identification features that can be used regardless of gender and all these colour variations. There is a diagnostic vertical black tag – the shape varies – beneath the lowest suture (the metapleural suture) on the thorax side and the eyes show a characteristic double stripe, more or less horizontally. 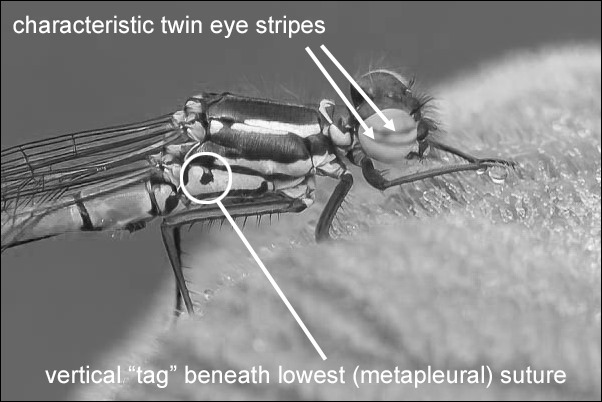