Sorting the Boys from the Girls

[A 3rd article written originally for the BDS e-publication, Hawker.]

Many odonata species exhibit sexual dimorphism. That is to say, the males look markedly different from the females. This, perhaps, reaches something of an extreme in some of our libellulid dragonflies, notably the Chasers and Skimmers, many of whose males become covered in a powder blue waxy deposit referred to as pruinosity, and Darters, whose males turn various shades of fetching red or black. Thus, determining gender can look like a simple matter. 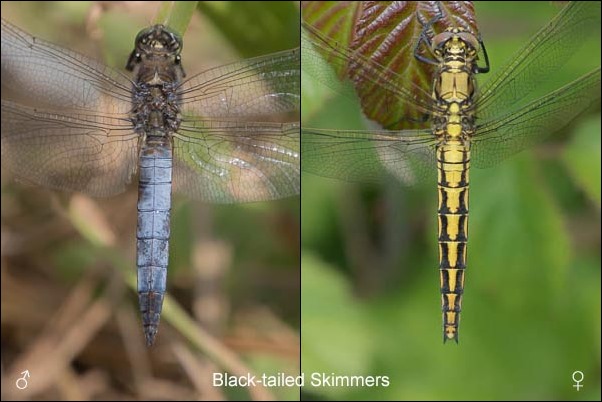 There are clues in my words, though: “become” and “turn”. The colours referred to are mature colours which develop as the dragonfly ages. So, it is really sorting the gents from the ladies that appears to be simple.

In particular at the beginning of a flight season there is a higher proportion of recently emerged immature specimens. These are yet to develop their textbook mature colours and at this stage the males tend to look much like the females. For these immature boys and girls, distinguishing their gender requires a much closer look.

Black-tailed Skimmers (Orthetrum cancellatum) may epitomize the difficulty of determining gender when immature; a recently emerged male and a female looking superficially all but identical.

This appendage shape pattern holds true for the other suspects, including the Darters. We see shorter, more widely spaced female appendages and longer, close-set male appendages. 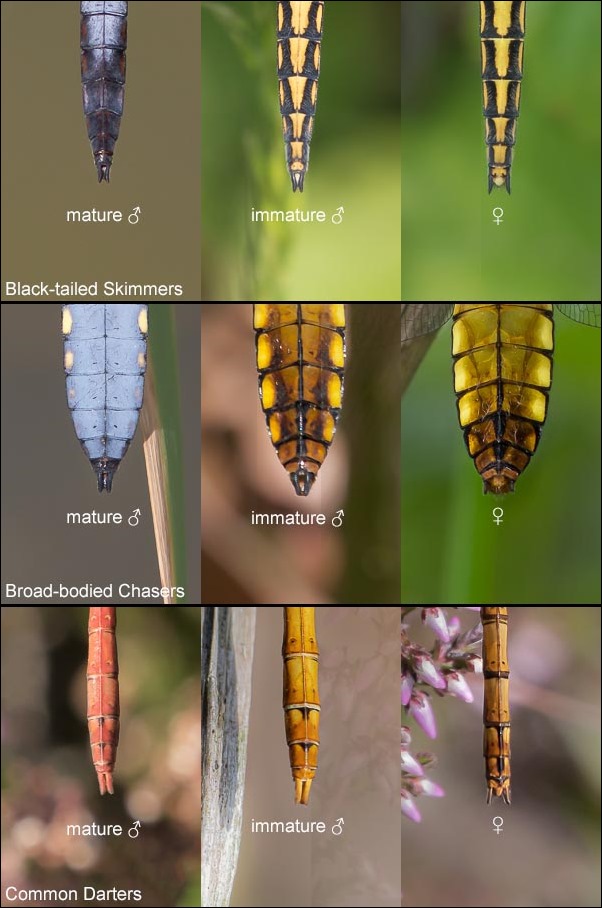 Don’t take the presence of pruinosity as a guarantee of masculinity, though. It should be noted that some “over mature” females may also develop a degree of pruinosty, though rarely as much as a mature male in his prime. I’ve seen a few pictures of female Broad-bodied Chasers (Libellula depressa) looking touched with blue.

Likewise, note that very mature female Darters can develop a red, male-like flush. Eleven years ago, whilst wearing L-plates and identifying on a provisional license, I was fooled by one such myself. Happily a mentor put me straight and I was grateful for the valuable lesson.

Here she is, a very red-looking female Ruddy Darter (Sympetrum sanguineum). She makes an interesting contrast to the immature male pictured beneath. Considering colour alone, the genders of these specimens could readily be confused. This pair also provides a good side aspect for some gender determining features. Note also the different shapes of the abdomens. 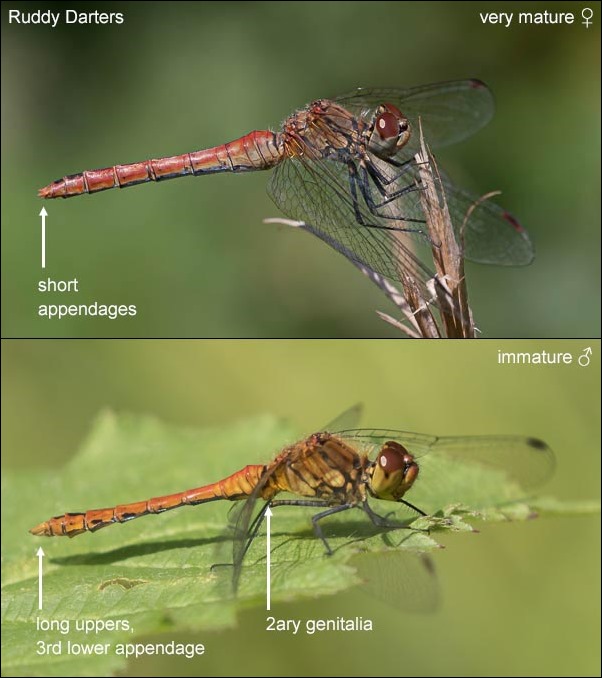 First glance suspicions can be misleading and it’s always a good idea to check the format of the appendages. After a while it becomes second nature.